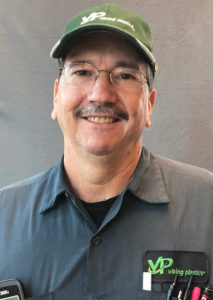 How long have you been at Viking?
41 years (Kellems & Coe, Genesis, Viking Plastics)

Which celebrity would you swap places with for the day?
Ricky Skaggs

If you could travel anywhere, where would it be?
Australia

What’s a talent no one knows about you?
I can juggle.

If you won the lottery, what is the first thing you’d do?
Arrange an extended trip to Australia.

If you could learn to do anything, what would it be?
To make Bluegrass music.

What is something you’ve learned in the last week?
I learned about Higgs Boson. It actually came up in a drumbeat meeting! 🙂
The Higgs Boson is an elementary particle in the Standard Model of particle physics, produced by the quantum excitation of the Higgs field, one of the fields in particle physics theory.

Favorite story/memory during your time at Viking?
The construction of and move into our current facility.